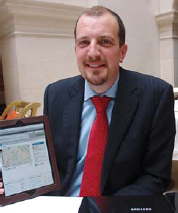 ●This article was translated into Japanese and published on magazine “Risk-taisaku.com” vol.32.

◆Profile Mike Jacobs is a Director at Biscon Planning (www.biscon.co.uk) a specialist business continuity consultancy. Mike has a particular interest in social media as a crisis communication tool. He can be contacted at mikejacobs@biscon.co.uk or at +44(0)845-076-5637.